Imagine our surprise when a follower contacted us and asked to write about it for the blog. We were thrilled. Anuj Kumar lets us in on the beauty and meaning of this fun celebration of life, spring, and human togetherness.

Holi – The Festival of Colors

Holi began as a festival celebrated, like many others, as a commemoration of a mythical event. For some, it signifies the victory of good over evil, and for others, the celebration of love. It is one of the few Indian festivals which has widespread international appeal.

This is probably because of how inclusive and simple the revelry is. It involves throwing colored powder and water on pretty much everyone celebrating. There’s no competition, no rules, just pure countrywide enjoyment – which means hundreds of millions of people taking part at the same time!

Holi is one of the most famous Indian festivals, with major celebrations happening in over ten countries. These include India’s neighbors like Bangladesh, Nepal, and Pakistan, as well as countries around the world like the UK, USA, Guyana, Suriname, and South Africa.

These countries have large Indian populations that celebrate it, and the local population joins in. The inclusiveness of the festivities has helped it spread beyond India’s borders, by bringing in a spirit of oneness and equality. In fact, some new countries even have their own ways to celebrate Holi, adding to the gamut of traditions that make up this now international festival.

As much as it has spread, the merriment cannot match the massive scale at which it is celebrated in India. As such, there are many Indians outside that miss the unbridled spirit behind the revelry, just as much as they miss their loved ones back home. There are, however, workarounds coming up. Smartphone apps like iHoli allow them to take photos of themselves, and add splashes and smears of color, and send these colored photos to loved ones! 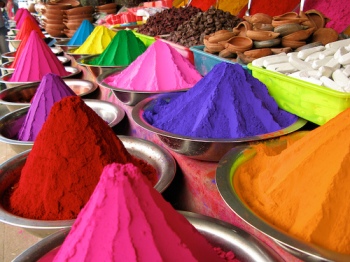 Though it’s based on Hindu mythology, it has the power to bring people of all religions together, in ways unlike any of its counterparts. It’s only a matter of time before Holi is as ubiquitous the biggest festivals of the world, with it’s new, unique traditions mushrooming as communities make it their own.

“Anuj Kumar is an app-freak. He is very keen to try out the new exciting apps. Be it Windows, iOS or Android – all the platforms are a matter of interest to him.”

This word has been circling around in my head lately. Maybe because between the winter gray, life’s demanding schedules and lack of free time, I’ve felt like any creativity, power, or self-motivation I can usually tap into at will is exactly that: Dormant.

Just like the tiny, frozen sprouts of grass underground, late winter in this climate always makes me sort of sink quietly into myself. I’m tired. It’s cold- outside. Heck, its cold inside!

It’s dark and silent and frozen inside my soul. And the things that were once green, alive with growth and light are hidden away beneath layers of snow and ice and frozen black earth.

But here’s what I seem to forget every winter: the most beautiful thing about February is that, even as the trees bend beneath the weight of the latest storm, tiny buds are starting to emerge from their branches. It takes a quiet mind and a searching soul to see them—but do this: Pull a frozen twig down, close to your face. Look closely. What you’ll see is literally life after death.

Sometimes it’s hard for us to see that what feels like death is actually the very antithesis of it. It is a rebirth; regeneration of life and all that confines it, often without logical explanation.

The sun re-appears and grows stronger with every passing, late winter day. Its light and heat is exactly the strength needed to coax sprouts out of the earth. New life is born under the deepest snow of winter. Spring happens without anyone forcing or willing it. It has purpose and meaning. It has boundless potential. As do we.

I can’t tell you how many people I’ve heard say in the last few weeks:

“I guess I have the winter blues. I just don’t want to do anything. I feel dead inside.”

If you feel unmotivated, tired, soulless, dormant, you aren’t alone. And it doesn’t mean you’re damaged or depressed, or dead inside. In fact the very opposite is true.

A period of dark and quiet is precisely what happens before the most beautiful things are born. So instead of begrudging yourself for wanting to just hold still all the time- sink into it for just a little longer. Be still and just breathe. Listen to the quiet inside your soul.

Wait… did anyone else hear that?

Much Love to All,